Minecraft Bedrock seeds give players across pretty much every platform the very best Minecraft worlds in which they can start their new adventure. But it can get pretty tedious when you’re looking for a particular kind of start, having to generate world after world until the game finally spits out the exact combination of attributes that you’re after.

Our list of best Minecraft Bedrock seeds is fully up to date with the latest version of Pocket Edition (1.16.20) and covers all bases from Mushroom Islands to glorious Mesa biomes, from gentle village spawns to snow-capped mountain ranges. Take a look!

If you’re playing Minecraft on Xbox, Mobile, the Microsoft Store on Windows 10, or pretty much any other device, then you’re running Minecraft Bedrock, and these seeds are for you. Previously known as Minecraft Pocket Edition (or PE), Bedrock is designed to be faster in almost every way than the original Java Edition, and built for crossplay between all possible Minecraft-running platforms.

The same Minecraft seed will give you different worlds between Bedrock and Java Edition. So you’ll need to look specifically for Bedrock or PE seeds like those below if you want them to work properly! To input a seed, just go to the “Seed” box halfway down the game settings when creating a new world, and paste your chosen seed into that box before clicking “Create”.

Here are all the best Minecraft Bedrock seeds for Xbox, Win10, and Mobile:

Note: if you’re after seeds for Minecraft Java Edition, then be sure to check out our guide to the best Minecraft 1.16 seeds! 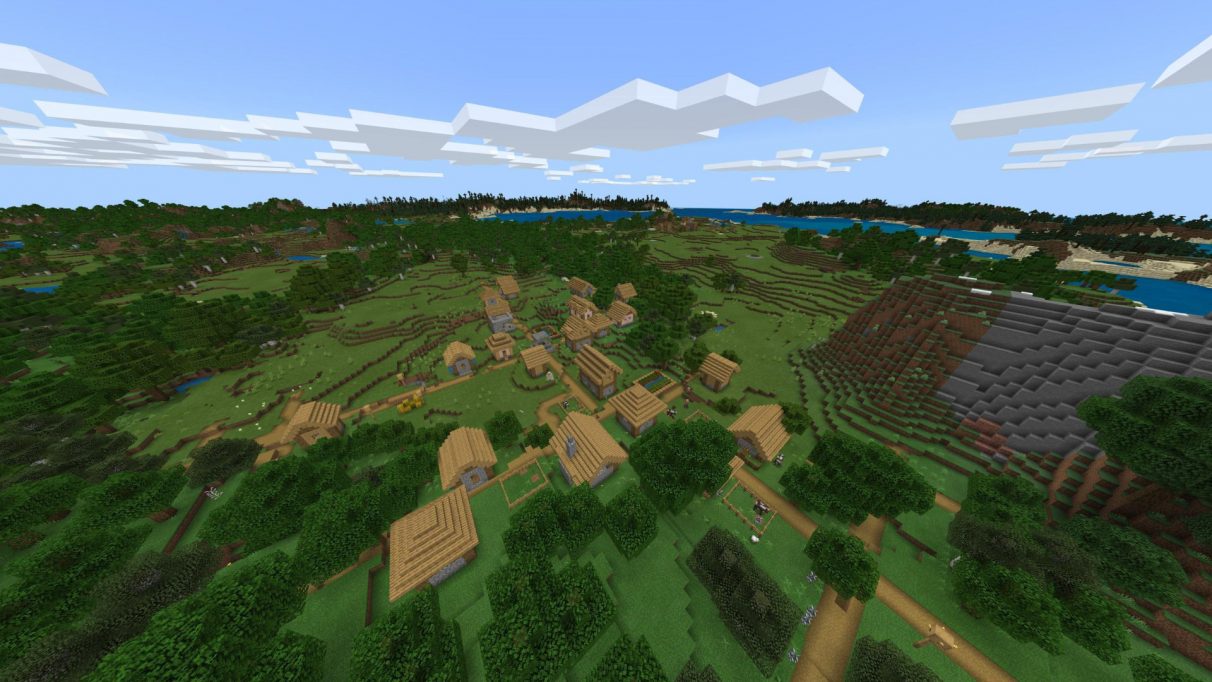 A lovely Minecraft seed for those hoping to get set up quickly with everything they need, this seed spawns you right next to two moderately-sized villages filled with food and gear aplenty. Trees and stone are readily available all around, so you can take your time in this starting biome before venturing out to see what other wonders this seed may hold. 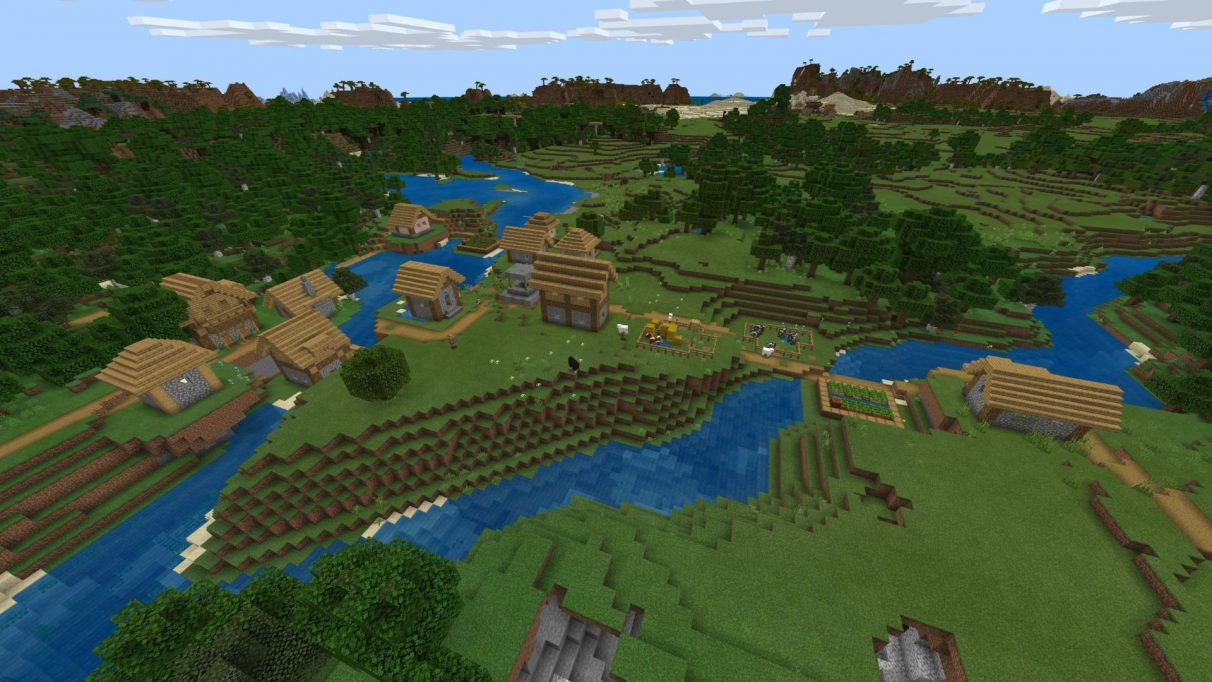 If you really want to spawn as close as possible to a village in Minecraft, then you can’t get much better than this Bedrock seed which spawns you literally on the roof of a village hut. Much like the previous seed in this list, you’ll be able to get set up nice and easy with this forest village seed, before heading down underground or over to those inviting Extreme Hills in the distance. 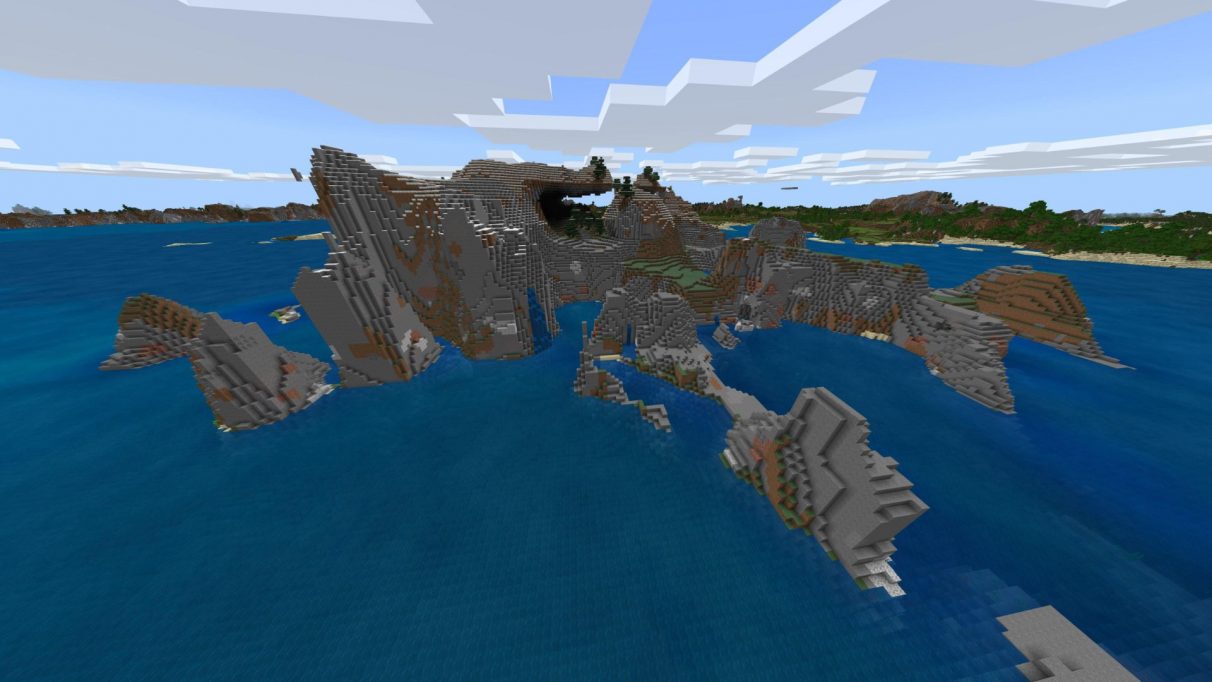 For a more immediate Extreme Hills experience, this seed spawns you on the coast where you can grab the immediate things nearby (wood, stone, chickens and sugarcane) before swimming over to this magnificent and characterful Extreme Hills island. Think of the builds you can create with this island as a base! 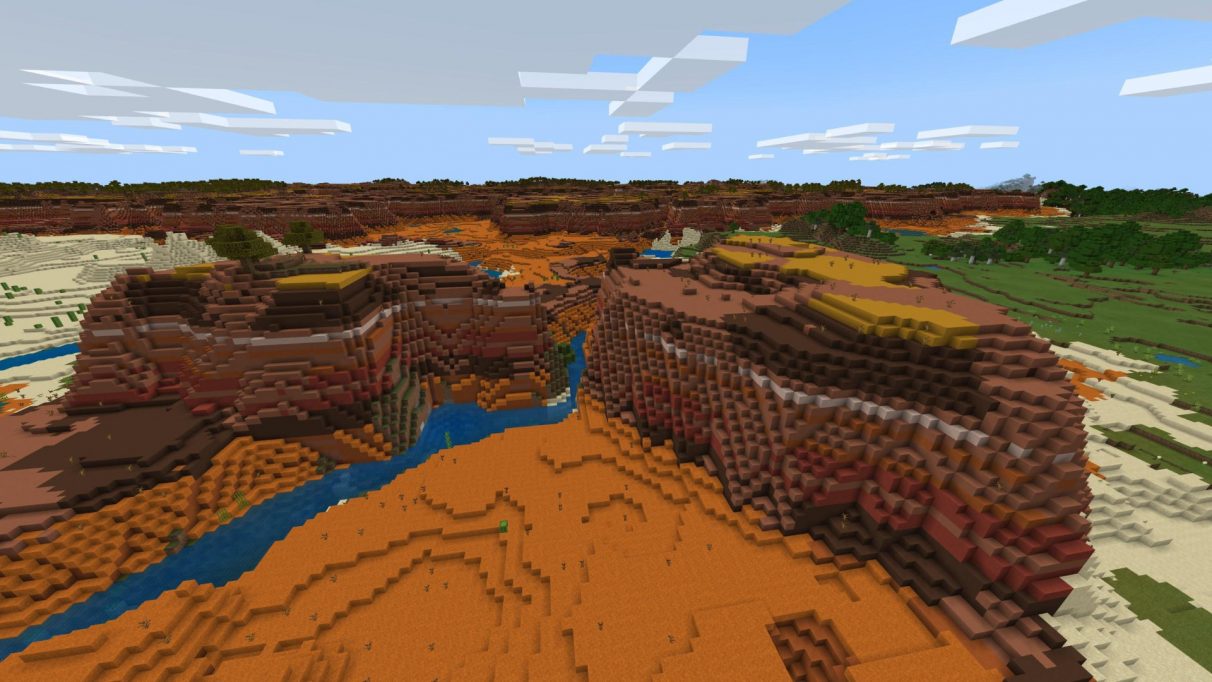 God, I love Mesa biomes. They are without a doubt my favourite places to be in Minecraft. And if you feel the same way, you’ll love this absolutely picturesque Mesa biome that stretches out almost as far as the eye can see. You spawn right on the border between Mesa and grass, so there are plenty of trees nearby to help you get set up before you venture deeper into Minecraft’s most colourful environment. 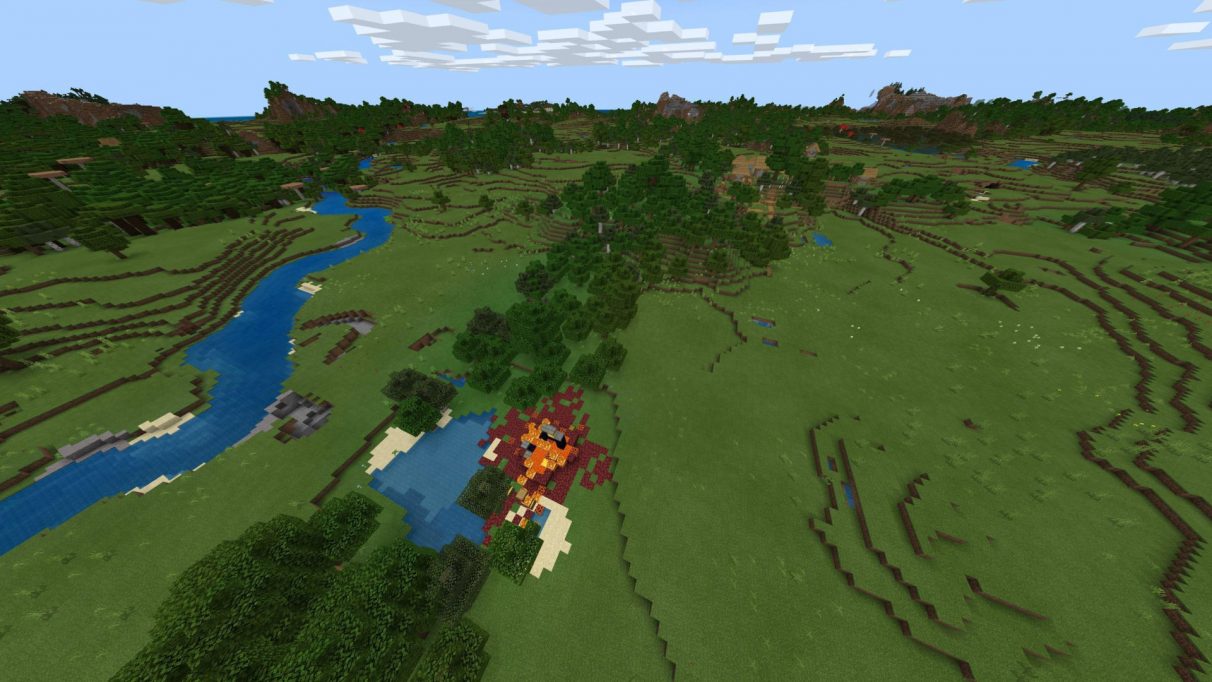 Quite the collection of builds await you in this grassland seed: you’ll spawn very near one of the Nether Update’s Ruined Portals, but look around a little more and you’ll spot a village only a few chunks away. Explore a bit further, and you’ll come across the most dangerous of the three nearby builds: a Pillager Outpost. 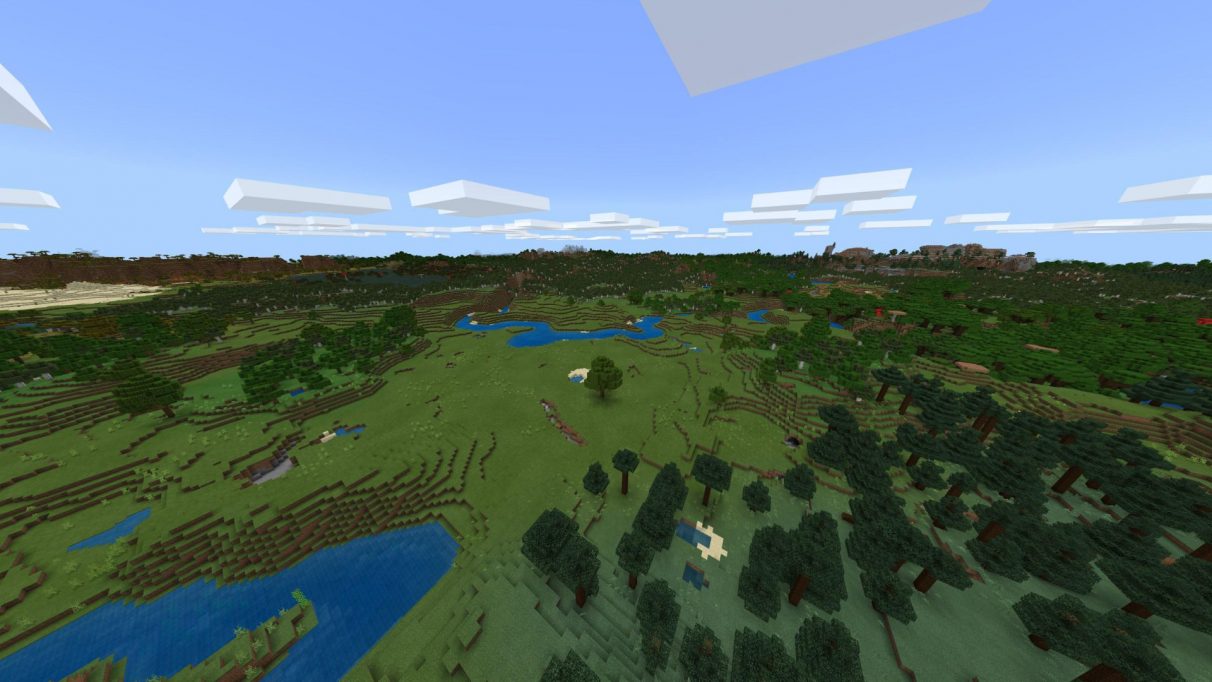 At first you may think this Minecraft seed is quite normal-looking. Perhaps even a bit dull. But you’ll soon realise why I decided to include it in the shortlist: from your starting patch of grassland, it’s just a short walk to what seems like almost every single biome in Minecraft. You’ve got forests of all kinds, Extreme Hills, Desert, Savanna, Swamp… If you’re after a challenge, why don’t you try and create a build in each biome? 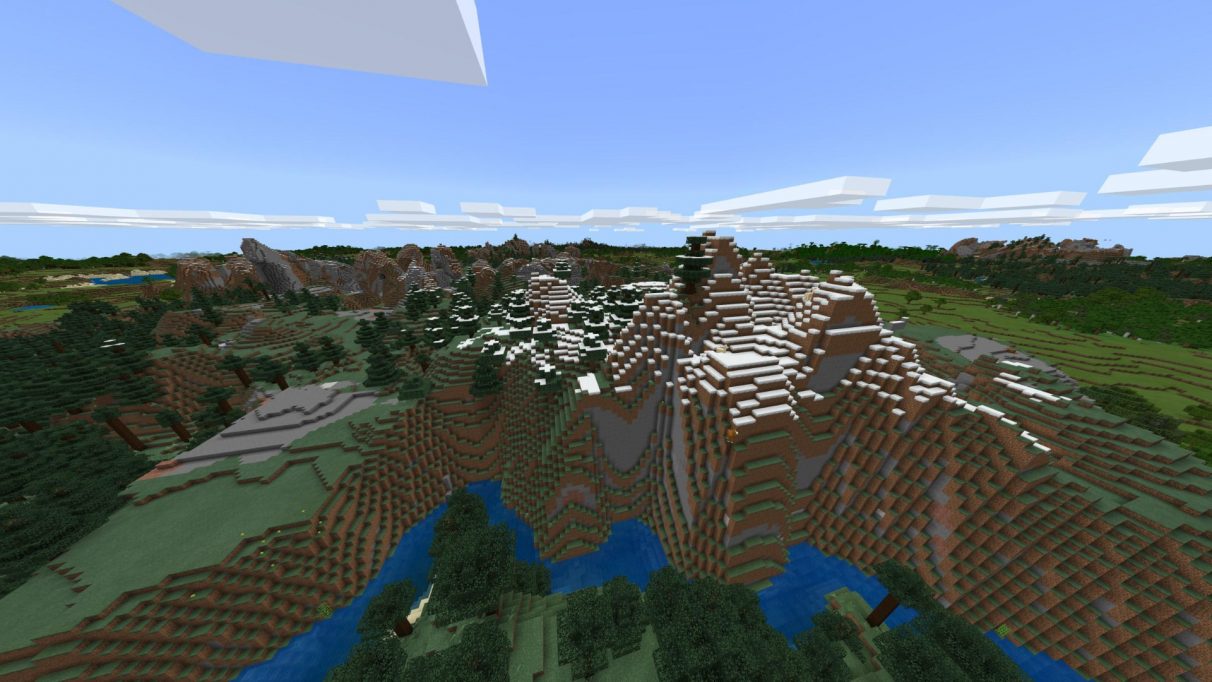 Mountain ranges like these take me right back to my first year or so playing Minecraft, a scant decade or so ago. They’re just so naturally beautiful and awe-inspiring, much like seeing a mountain range in real life. Plus, the mountain range in this particular seed gives you a great view of all the grassland and forest surrounding it. 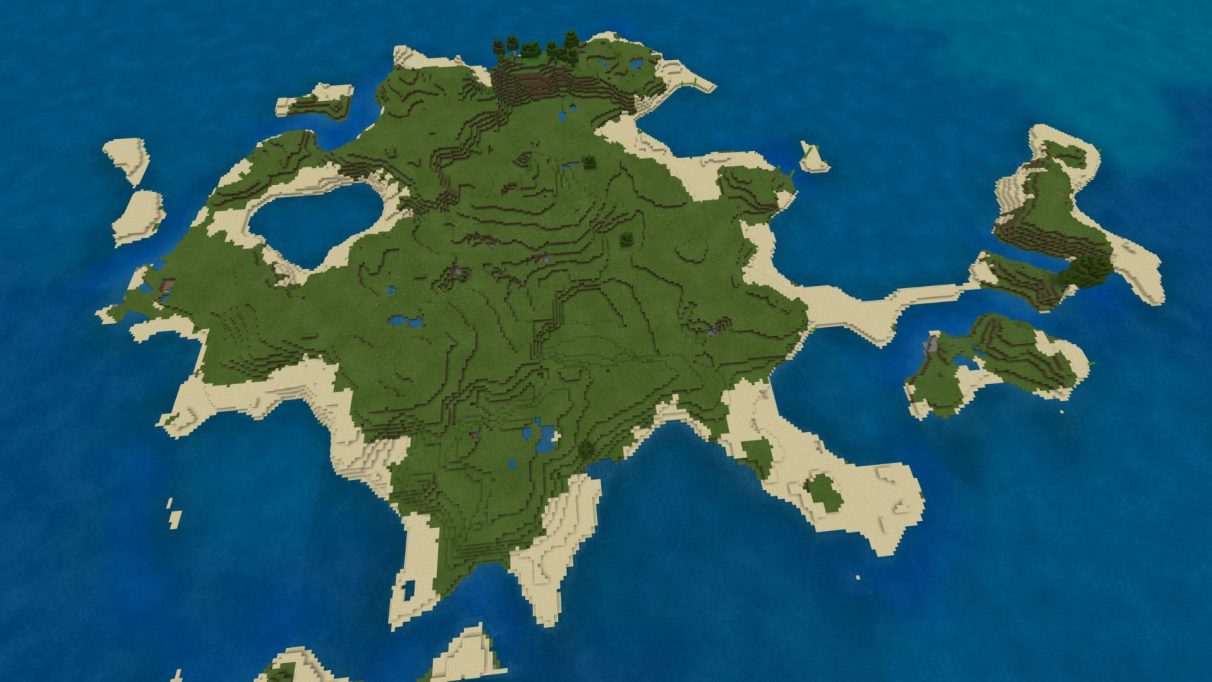 Is there any better canvas for a magnificent Minecraft build than a relatively flat, large starting island? Just take a look at this island, and think about what you could build. Would you make this the home of a quaint fishing village, or turn it into a veritable King’s Landing? The choice is entirely yours – but you’ll have to do some sailing to find enough wood first. 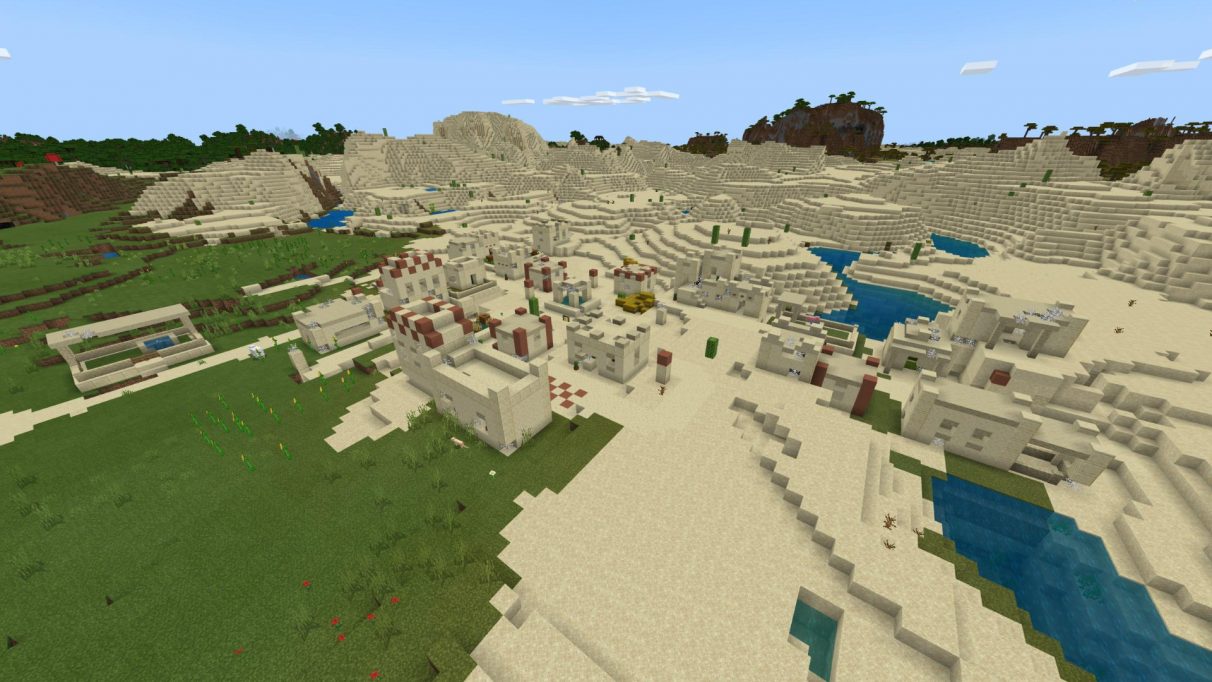 If regular villages are a bit too boring for you, then this Minecraft seed is for you. You spawn mere blocks away from a Desert Zombie Village, filled with spiderwebs and zombs galore. What treasures might this village hold? I know the answer, and you can too if you take a look at this seed yourself. 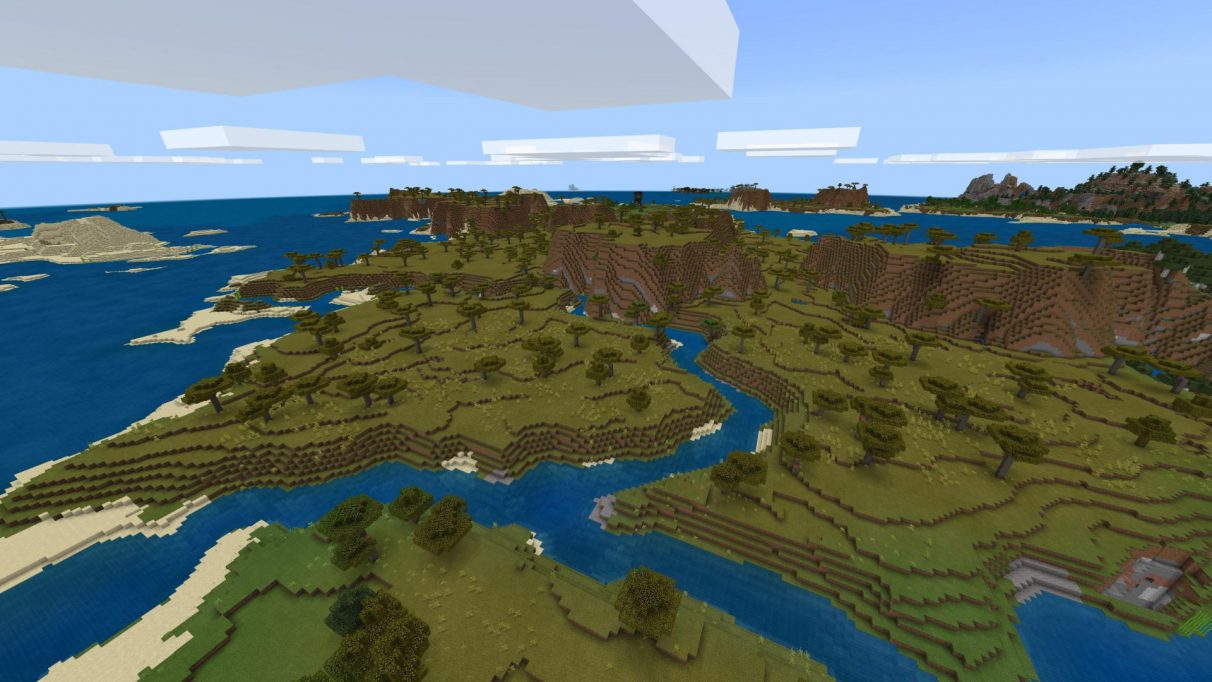 This seed spawns you in a beautiful Savanna biome on the coast. The landscape is split by rivers and a winding line of hills, lending an already lovely biome even more flair and character. The choice is yours: do you stay and make this savanna your home, or would you rather set sail into the ocean and see what awaits you on the other side? 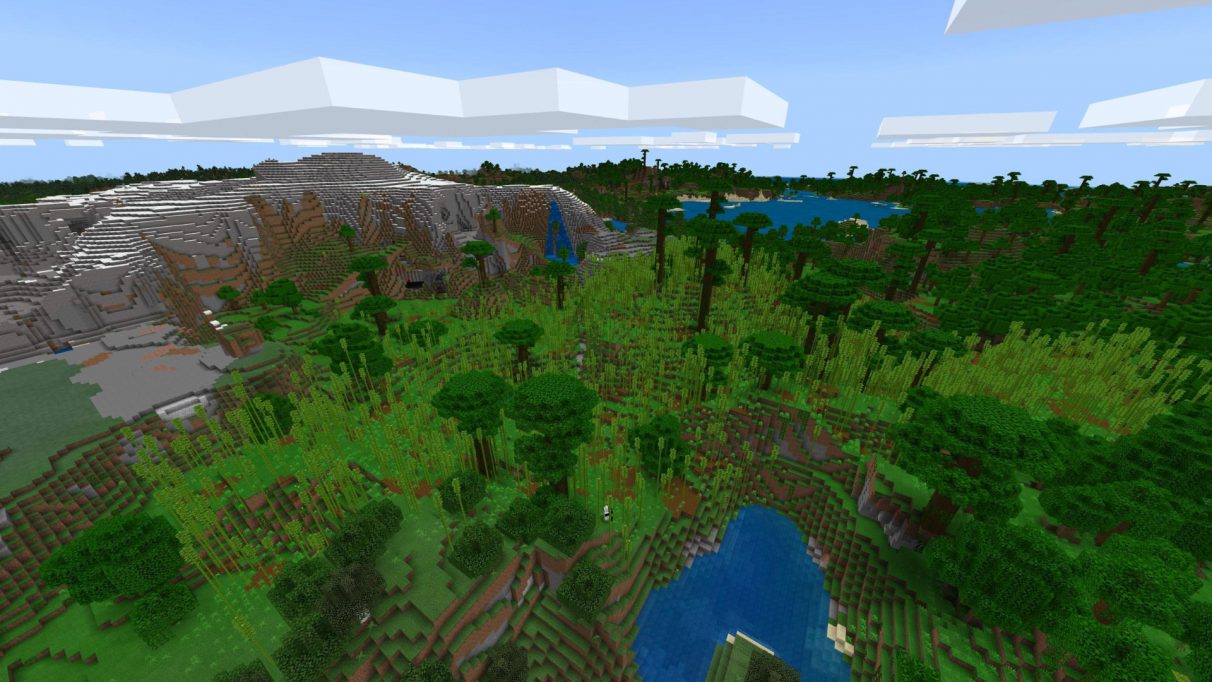 Bamboo Jungles are the most recently added overworld biomes, and they’re surprisingly rare (though not nearly as rare as the biome in the next seed!). Thankfully, this Bedrock seed spawns you right on the edge of a really rather lovely Bamboo Jungle which phases into regular Jungle after a while. Say hello to the pandas for me! 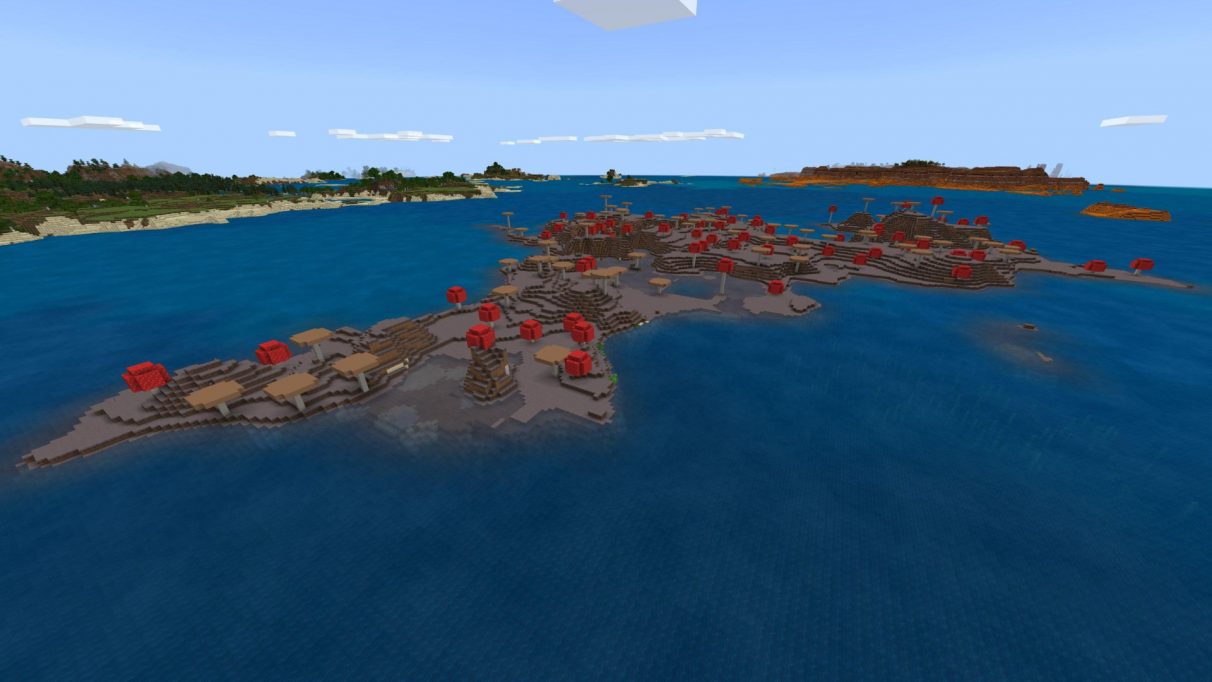 One of the rarest sights in Minecraft, the elusive Mushroom Island is places in full view from the very start of your journey with this particular seed. And what’s more, it’s surrounded by other great biomes like Mesa, Roofed Forest, Extreme Hills, and more. So once you’ve said hello to the Mooshrooms, you can find the perfect place to settle down no matter what you’re after. 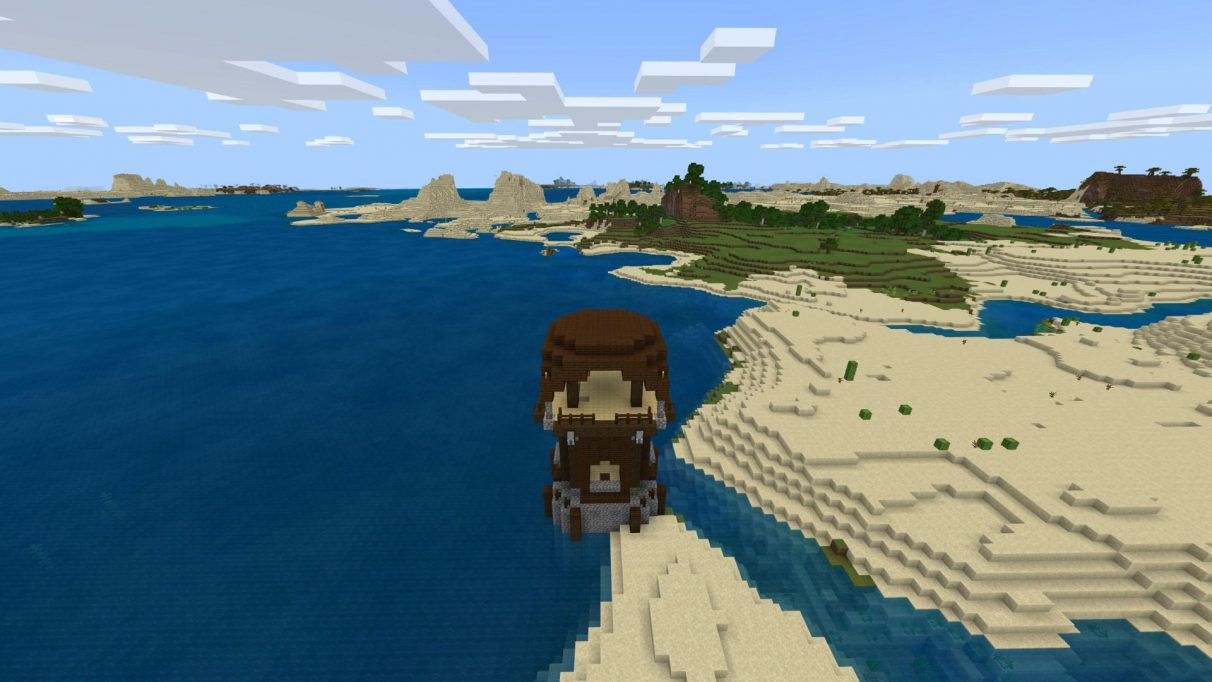 A coastal Pillager Outpost guards the desert of this Minecraft seed – but that’s okay, because if you head in the opposite direction down the coast you’ll find a much more pleasant structure: a Desert Pyramid. But that’s not all: follow the coast further round, and you’ll soon spot a Desert Village, plonked down right next to yet another Desert Pyramid! Get geared up, then defeat the Pillagers to claim this world for yourself. 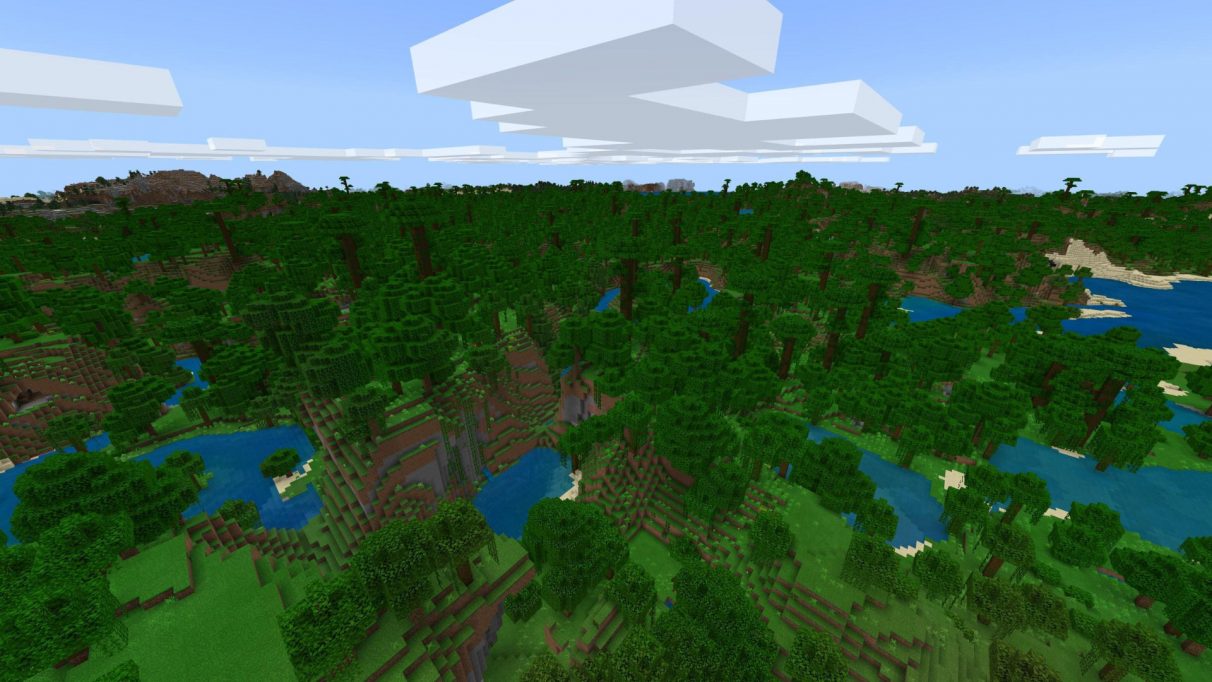 If your device can handle the stress of rendering all that undergrowth and overgrowth, then this massive Jungle biome is a great place to start for players who really like the colour green. Imagine how great it would look, with an amazing treehouse build (perhaps one of those featured in our Minecraft house ideas guide) rising out of the overgrowth… 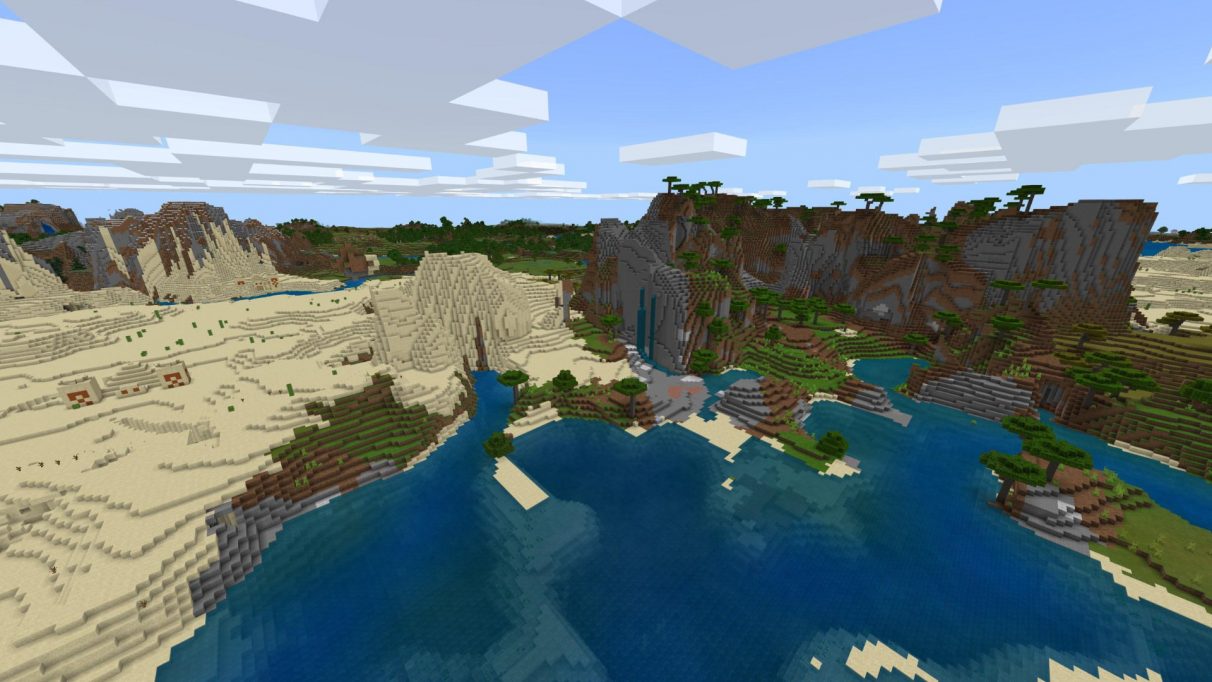 Another seed which very generously spawns you near two Desert Pyramids, this Minecraft seed has another surprise in store for you after you’ve got geared up. Bordering the desert is a truly fantastic-looking Extreme Hills biome filled with twists and turns and arches and other wonders of Minecraft’s world generation system. 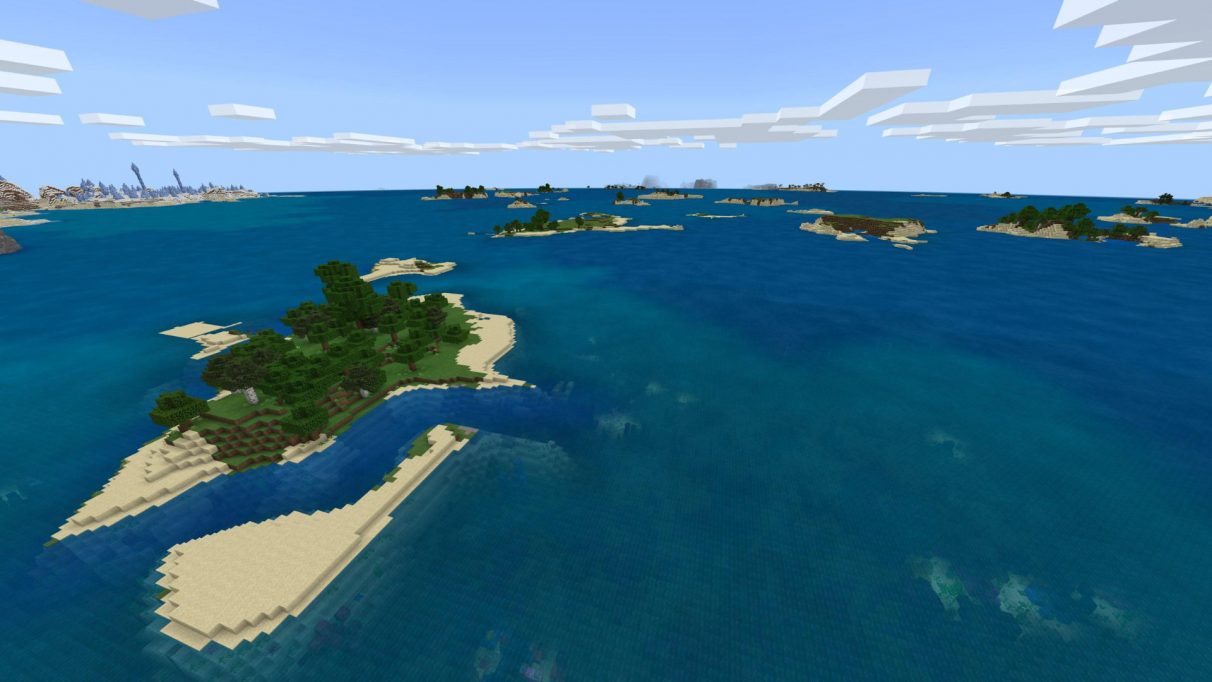 Island lovers, this one’s for you. This seed gives you free reign of a large and beautiful-looking archipelago of over a dozen islands, starting you on an easy island with plenty of trees and other resources to help you get from the early game gearing up phase of Minecraft to the “let’s build some amazing things all over this archipelago” phase.

So there you have it! All the very best Minecraft Bedrock seeds that we’ve found in our time playing. Hopefully you’ve found the ideal start for your new Minecraft home here: but in case you need some more direction when it comes to Minecraft, check out our other guides!